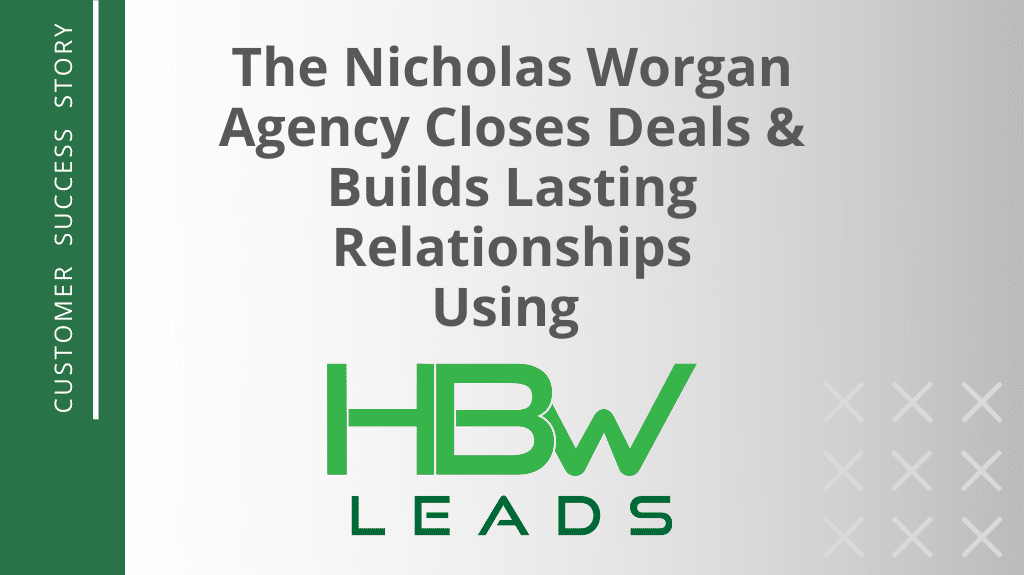 Founded in 2021 and based in Rogers, Arkansas, The Nicholas Worgan Farmers Agency offers personal lines, commercial lines, and life insurance. As the agency owner, Nick Worgan’s mission is to lead by example and break the common industry mindset of approaching insurance like a commodity. Instead, he wants to build relationships and ensure his customers are educated and empowered in their coverage decisions.

“We need to stop approaching people as just cows and herds, and this, that, and the other, and go back to the humanity side of things and focus on protecting the people, which is what this is all about.”

To keep his sales pipeline full, Nick was drawn to HBW Leads because of the lead exclusivity. Unlike other lead providers such as internet leads, HBW leads are 100% qualified and exclusive telemarketed leads. That means each lead expects a call from an agent. After having an informative sales experience with the HBW team, he solidified his decision to purchase exclusive auto and home leads. “She took the time to explain everything to me,” Nick remarked about his HBW sales representative, Lauren. “She was patient. She took the same approach with me that I do with my customers.”

Since HBW Leads are exclusive, Nick doesn’t have to worry about competing with other agents for the same leads. That was helpful during his cohort period with Farmers Insurance. “At Farmers, we have five weeks of a cohort,” said Nick. That doesn’t leave much time to call people. So, I turned off all the other leads that were non-exclusive and kept my HBW’s.” Since he was in class, he didn’t have time to compete with other agents for shared leads. HBW just made business sense.

With shared leads, there’s an obstacle when it comes to the first call. Customers can become upset when they receive calls from multiple agents, making it more difficult for agents to establish a relationship. But with exclusive leads, Nick doesn’t have to sweat about calling bothered prospects. They all expect his call and are patient. “They’re not being pitched 40 times a day [and] they’re not having 15 sets of numbers thrown at them so that that exclusivity is kind of key,” Nick explained. From there, rapport building can begin.

By eliminating the competitiveness of shared leads, Nick doesn’t have to be on edge when a new exclusive lead is sent to him. Instead, he can focus on building the relationship. He reflected on his experience with a recent customer: “The first two calls that we have had, I didn’t even pitch, I didn’t even talk about insurance. All we talked about was his family. The reason that I can do that is because I don’t have to worry about ten other people calling. You see that the common theme here [is that] the exclusivity changes everything.” Nick’s patience and relationship building is paying off too- he’s closing new business.

“It's becoming a true relationship-building venture for both of us. And not only that, it's affecting my close rate, because I don't have to try as hard. But having that relationship built, people are closing themselves.”

Sales is a numbers game, and with his exclusive leads from HBW, Nick’s sales pipeline is consistently full. He has follow-up calls scheduled and he’s closing deals with leads he acquired in the prior months. “I’m still closing sales, but I got [them] two months ago- you can’t say that with any other lead,” Nick Remarked. “Having that exclusivity is really helping me have the growth that I need to get to the point where I can start having a lot more follow-ups.”

Nick is building a playbook for long-term agency success. And for him, it starts with the right mindset and exclusive HBW Leads.

Learn how you can grow your book with exclusive and verified leads from HBW. Click here to get a personalized lead package.